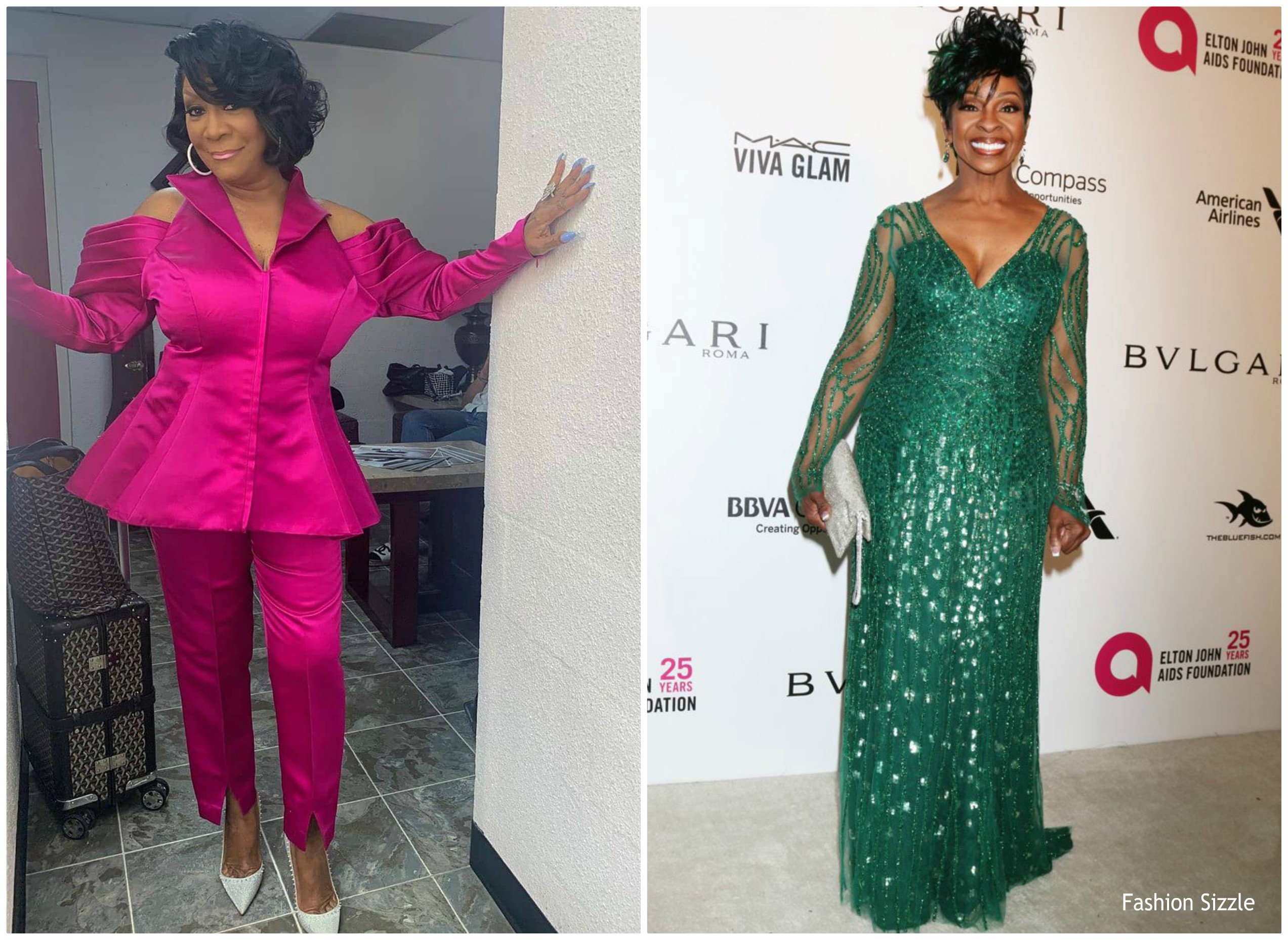 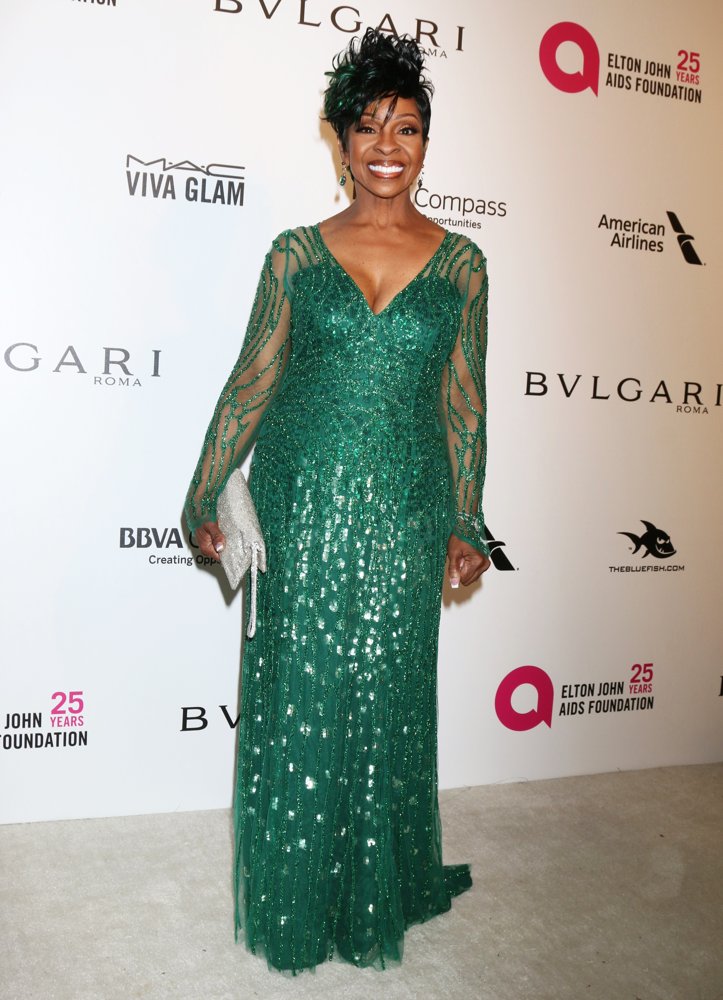 “We are so happy to be together,” LaBelle kicked off the event by saying. “We’ve been together for many, many, many years.” The two then recounted their long history together, sharing memories of the various ways their careers had intersected over the years, and expressing plenty of mutual affection — about each other’s musical artistry, as well as about their respective families and even their famous culinary exploits.

Round 1: Patti LaBelle’s “All Right Now” vs. Gladys Knight and the Pips’ “You’re the Best Thing That Ever Happened to Me”

Patti goes fairly deep for her leadoff cut, with the high-energy early ’90s cut ‘All Right Now.” (“I only made four videos in my life, and that was one of them!” she comments.) Gladys goes classic, singing over an instrumental of her Pips-backed ’70s Billboard Hot 100 top five hit “You’re the Best Thing That Ever Happened to Me.” Good start for both, but slight early advantage to Gladys.

Round 2: Patti LaBelle’s “If You Asked Me To” vs. Gladys Knight and the Pips’ “Make Yours a Happy Home”

“Céline did this after I did!” Patti remarks. Indeed, while Céline Dion went to the Hot 100’s top five in the early ’90s with “If You Asked Me To,” the Philly soul icon reminds why her immaculate 1989 original from the Licence to Kill soundtrack remains definitive, while also explaining the tragic circumstances that impacted her emotional performance in the song’s video. Knight declines to counter with her own Licence to Kill theme, instead going with the Claudine soundtrack jam “Make Yours a Happy Home” — a fine choice, but hard to compete with Patti’s powerhouse performance. 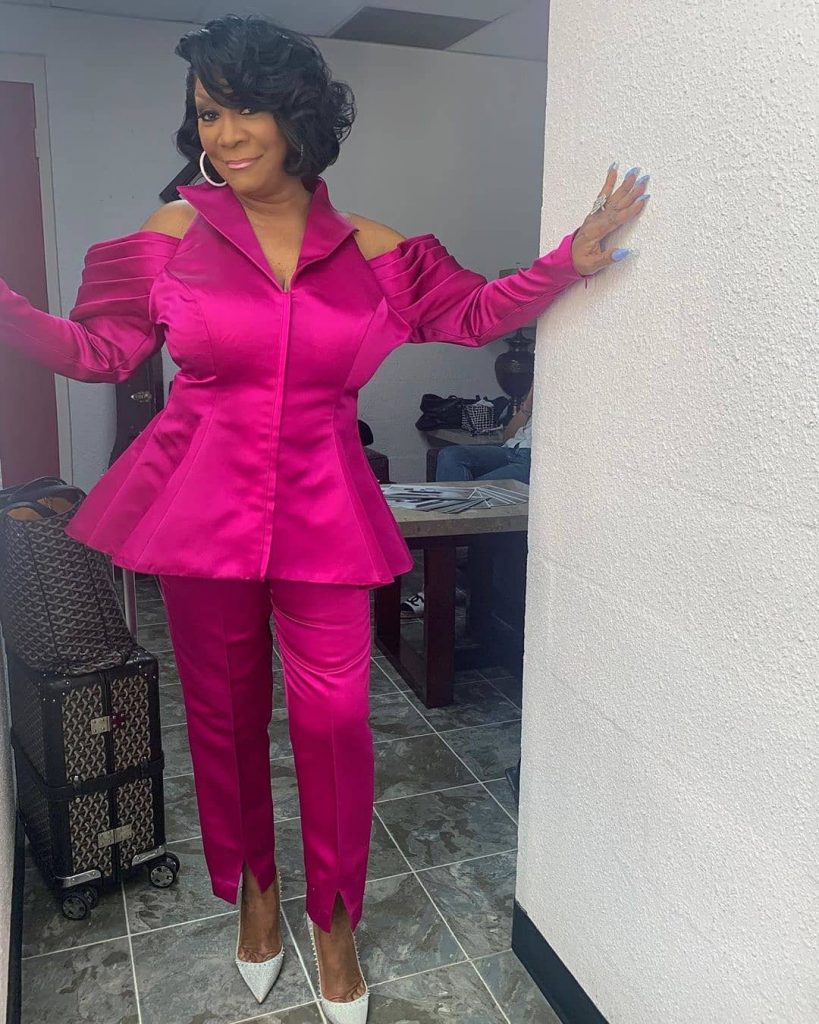 Round 3: Patti LaBelle’s “Stir It Up” vs. Gladys Knight and the Pips’ “Every Beat of My Heart”

“It’s kinda corny but I love it!” Patti admits of her second-best-remembered Beverly Hills Cop soundtrack single. “Stir It Up” is certainly a fun flashback, but not as fun as Gladys going all the way back to the beginning — to 1961, when her group was simply known as The Pips, and they hit the Hot 100’s top 10 for the first of many times to come with the Johnny Otis-penned ballad “Every Beat of My Heart.” Still impossibly smooth nearly 60 years later.

Round 4: Patti LaBelle’s “When You’ve Been Blessed (Feels Like Heaven)” vs. Gladys Knight and the Pips’ “On and On”

An edited-for-time version of Patti’s early-’90s superballad “When You’ve Been Blessed” throws her for a loop slightly, but she picks it up in time to stun with a cappella vocals over the song’s fade out. Knight dips back into the Claudine soundtrack with the supremely funky “On & On,” written (like the whole OST) by the similarly legendary Curtis Mayfield. “We gotta [keep going],” Knight comments after. “Long as he keeps giving us the breath, the love, the spirit, and the talent!”

Round 5: Patti LaBelle’s “If You Don’t Know Me By Now (Live)” vs. Gladys Knight’s “Licence to Kill”

After it was originally written for her group Labelle — they never recorded it, and it became a massive hit for fellow Philly stars Harold Melvin & The Blue Notes — Patti made the all-timer ballad “If You Don’t Know Me By Now” her own during her live show in the 1980s. Here, Patti and Gladys both harmonize gorgeously over the live recording of the former’s rendition, one of the evening’s most goosebump-inducing moments. Gladys chooses now to pull out her Bond theme, and it still sounds mighty, but she’s already helped secure this round for Patti.

Round 6: Patti LaBelle’s ‘My Love, Sweet Love” vs. Gladys Knight and the Pips’ “Midnight Train to Georgia”

While the blockbuster Waiting to Exhale soundtrack was largely a showcase for the biggest R&B stars of the ’90s, it made room for some of the original legends, as well — including Patti’s stirring ballad “My Love, Sweet Love,” which Patti ends by shouting out the song and soundtrack’s musical architect, fellow Verzuz alum Babyface. The feed briefly cuts out from there, and when it returns, Gladys Knight is already midway through belting her signature hit with the Pips, “Midnight Train to Georgia.” Frustrating to have the moment compromised, though any amount of “Midnight Train to Georgia” is still impossible to argue with.

Round 7: Patti LaBelle’s “Love, Need and Want You” vs. Gladys Knight’s “Someone to Watch Over Me”

“That’s not my right song!… Put my right song on the teleprompter!” It’s not quite “Where are my background singers?” but it’s still a classic Patti moment as she sings her way through a Verzuz technical snafu, with Gladys even pitching in backing vocals on her beloved (and oft–revived) early ’80s ballad “Love, Need and Want You.” Gladys responds with her sublime spin on the George and Ira Gershwin vocal standard “Someone to Watch Over Me,” but the round’s been decided.

Round 8: Patti LaBelle’s “Right Kind of Lover” vs. Gladys Knight and the Pips’ “Friendship Train”

Still no lyrics on the teleprompter for Patti as her 1994 hit “Right Kind of Lover” plays, so it’s just vibing for her and Gladys on this one — which is fine, since the Beverly Hills Cop III soundtrack single still sounds impressively fresh. Then, it’s time for the two to get on board with Gladys’ topical “Friendship Train” from a half-century ago, a piercing Norman Whitfield production which Gladys rightly points out is “still [true] for today.”

Round 9: Patti LaBelle’s “Over the Rainbow” vs. Gladys Knight and the Pips’ “Neither One of Us (Wants to Be the First to Say Goodbye)”

Patti punctuates the high-note climax of her fan-favorite rendition of The Wizard of Oz standard “Over the Rainbow” by kicking off her shoes and leaping out of her seat. (“Ooh, my knee is hurting!” she proclaims afterwards, with both ladies cracking up.) Gladys offers a message of political hopefulness, before the the cool breeze of the opening bars of “Neither One of Us” comes blowing through the set, and Gladys loses herself singing along to one of her all-time greatest hits, eventually getting out of her seat as well. Can’t choose against either of these.

Round 10: Patti LaBelle’s “Somebody Loves You Baby (You Know Who It Is)” vs. Gladys Knight and the Pips’ “You’re Number One (In My Book)”

“This is my number one favorite of yours!” Gladys proclaims as the opening piano riff from Patti’s early-’90s show-stopper “Somebody Loves You Baby” twinkles from the speakers — with the latter’s gigantic vocals, both on record and live from the Verzuz studio, making it clear why. Speaking of number ones, though, here comes Gladys with the silky 1983 R&B top five hit “You’re Number One (In My Book).” An underrated one, but even Gladys would probably give this round to her competitor.

Round 11: Patti LaBelle’s “Kiss Away the Pain” vs. Gladys Knight and the Pips’ “I’ve Got to Use My Imagination”

Round 12: Patti LaBelle’s “New Attitude” / “On My Own” (with Michael McDonald) vs. Gladys Knight and the Pips’ “Midnight Train to Georgia” (Encore)

A little formatting strangeness here, as Patti squeezes in two stone ’80s classics (including her other Beverly Hills Cop smash) for the price of one, while Gladys responds by running back an instrumental version of “Midnight Train to Georgia” for her to sing over. Good to get  “Georgia” more in full after Gladys’ first play of it was interrupted by IG outages, but no question that this round goes to Patti’s one-two punch.

Patti’s DJ is now in free-associative medley mode, mixing in her 2004 Hot 100 hit “New Day” with her slamming ’90s hit “Feels Like Another One,” her appearance singing the alphabet on Sesame Street, and her timeless No. 1 hit with eponymous ’70s group Labelle, “Lady Marmalade.” Patti seems as confused as anyone as to what’s happening with the musical rapid-fire, but she rolls with it, explaining that her group “didn’t know what” the French chorus of “Lady Marmalade” meant when they originally recorded it — “we just knew it sounded like a hit.” Gladys responds with a sole song in her late-’80s smash “Love Overboard,” and it sounds phenomenal. A little too weird to even score this one, really, but since we gave Patti the last one, we’ll give this one to Gladys for simply going 1 for 1.

Round 14: Patti LaBelle’s “You Are My Friend” / “If Only You Knew” vs. Gladys Knight, Dionne Warwick, Elton John & Stevie Wonder’s ‘That’s What Friends Are For”

“Gladys, this is dedicated to you,” Patti intros one of her signature numbers, “You Are My Friend,” from her 1977 self-titled debut solo LP. Her sound mix is still a little low — “What y’all doin’ over there? Y’all in the corner doin’ something over there,” she asks offscreen before the song begins — but she provides the live vocals to fill it out, then does the same with her 1983 gem “If Only You Knew,” her first solo No. 1 on the R&B Songs chart. Should be impossible to beat that combo, but then Gladys Knight brings none other than legendary peer Dionne Warwick out of the shadows to help out on Hot 100-topping ’80s charity single “That’s What Friends Are For,” with the three ladies harmonizing together at center stage. The entire round makes for a beautiful tribute to friendship in general.

Then, after the three ladies offer one more powerhouse performance together — of their early-’90s superteam cover of Karyn White’s “Superwoman” — Dionne bids them adieu, and then Patti and Gladys call it a night themselves. It’s the first time since the official Verzuz format was set in the early days that a match doesn’t go 20 full rounds, but the performances with Dionne would be impossible to follow anyway, and no one watching could say they didn’t more than get their money’s worth already. 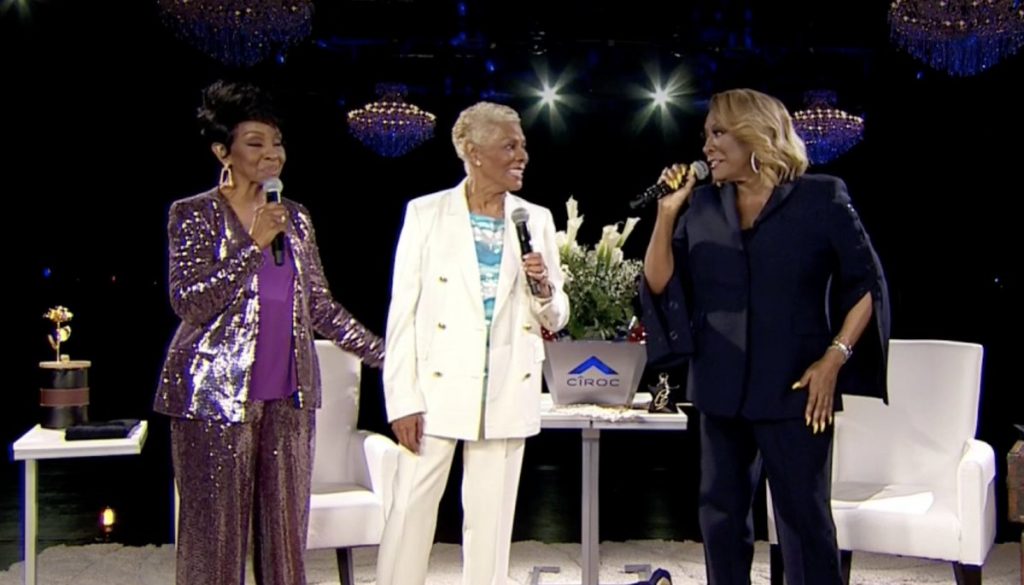 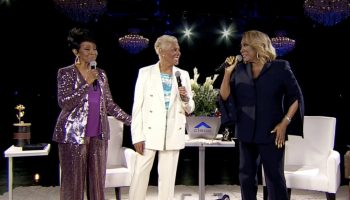 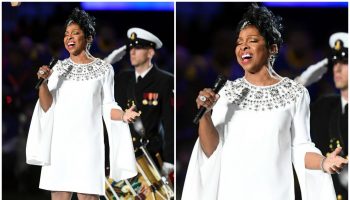 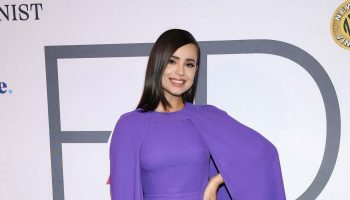