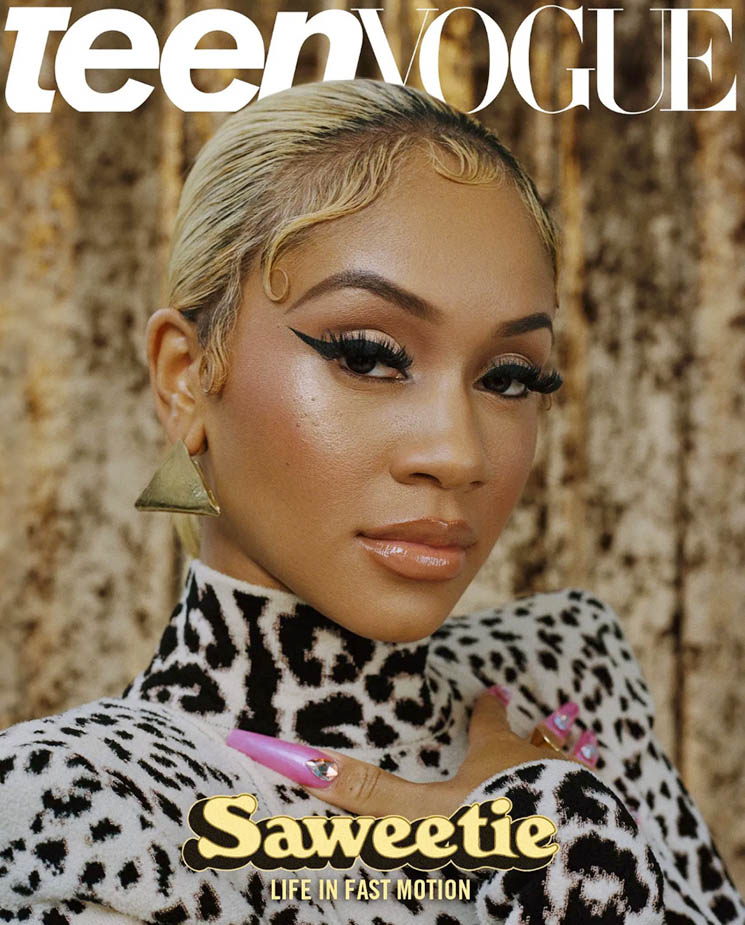 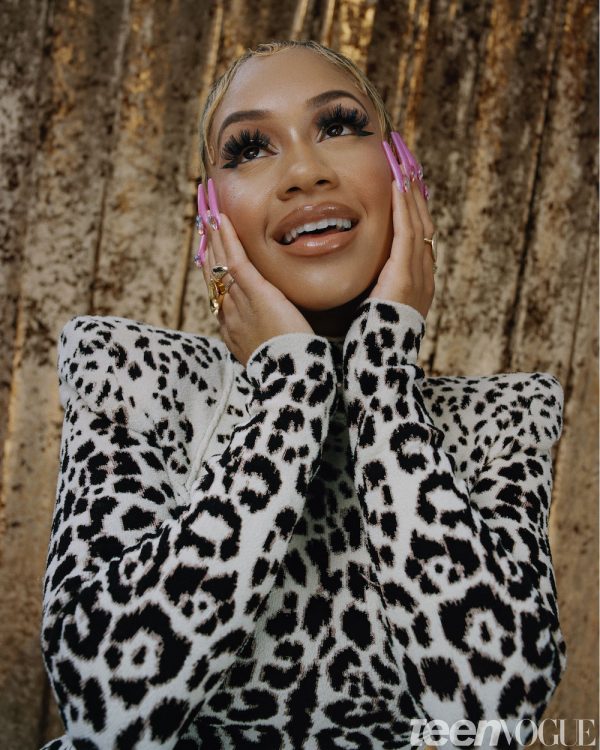 For the issue, the Bay Area beauty talked to fellow Filipina Adelle Platon about her debut album, Pretty B*tch Music, being raised by Bay Area celebrities and how she refused to compromise her values coming up in the music industry, despite sometimes being in a hard place financially.

Check out some key excerpts via Teen VOGUE below: 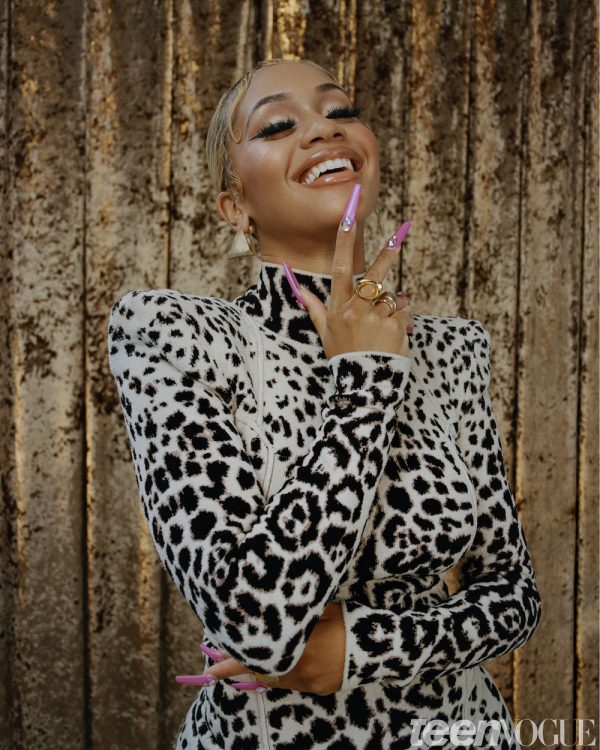 On being raised by her parents, model and manager Trinidad Valentin (who appeared in music videos for Nelly, DMX and LLL Cool J), and former San Jose State football star, Johnny Harper:

“My parents are very ‘do as I say, not as I do.’ They’re like Bay Area legends. Like, if you [say] their names in the streets, it’s gon’ ring some bells. My mom’s a tiger mom. She wanted straight A’s. Her disciplining me at a young age got me into the habit of achieving high goals.”

On growing up in a unique family structure:

“Growing up, I was confused a lot. Like, I would get mad. I think my parents not being together really just affected me emotionally as a child, and I carried that stress and disappointment [when I was] a teenager. I used poetry as a way to express myself.” 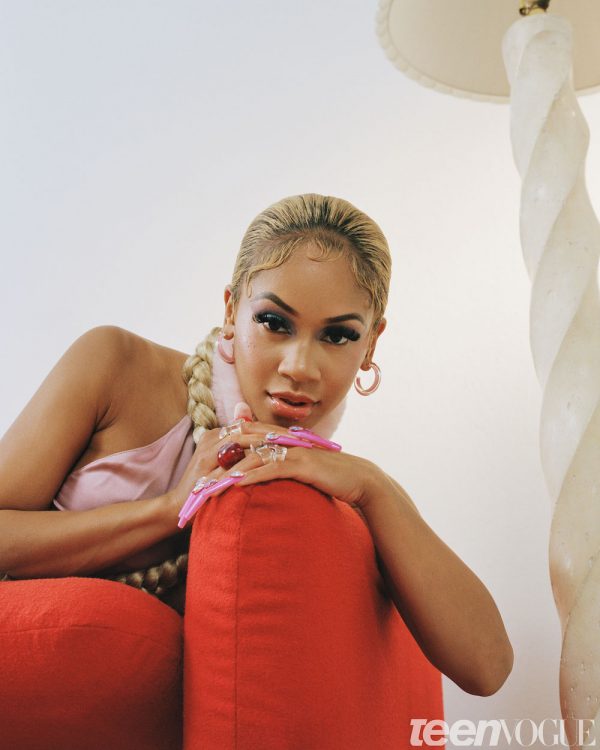 On self-discipline in her youth after being caught shoplifting as a high school sophomore:

“Before I went to college, I almost went to jail because I got caught stealing… At a young age, I just always liked the finer things — and I’m not even talking about name brands. I just like looking good. In that moment, I was like, I’m not really about this life. I get straight A’s, I’m a year-round athlete. I think the lesson was that [I had worked] too hard for everything to be thrown away.”

Wow! Were you surprised to hear Saweetie used to boost clothes? She looks amazing in this shoot. Shout out to Zerina Akers who styled her for this cover shoot. Let us know which look is your favorite.

On achieving stardom before the COVID-19 pandemic: 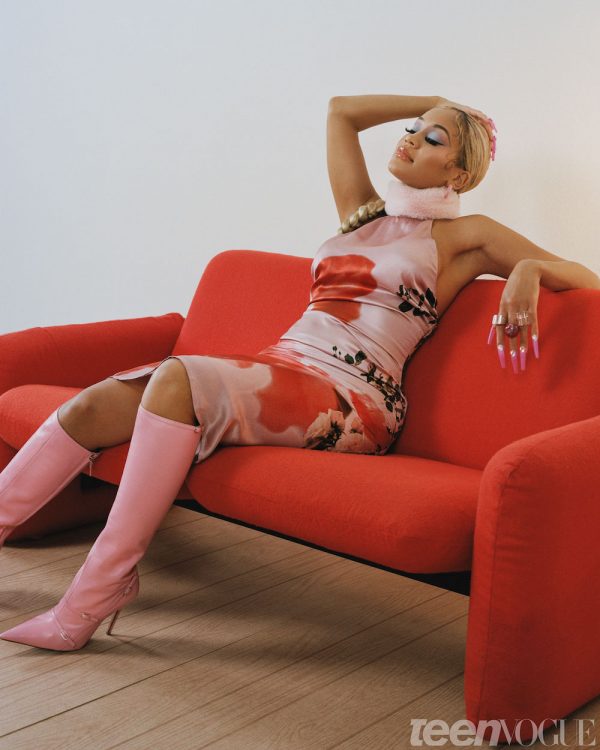 “I realized that I never equated attention with happiness, so all that attention I was getting was overwhelming for me and I didn’t know how to handle it. Which is why — fast forward to last year and this year in quarantine — I had a lot of time to reflect, and that made me want to take back my power of being confident and made me want to rethink my career.”

She makes really good points here. We all have seen it happen so many times with artists hitting it big with their first single and then struggling to manage their overnight notoriety. 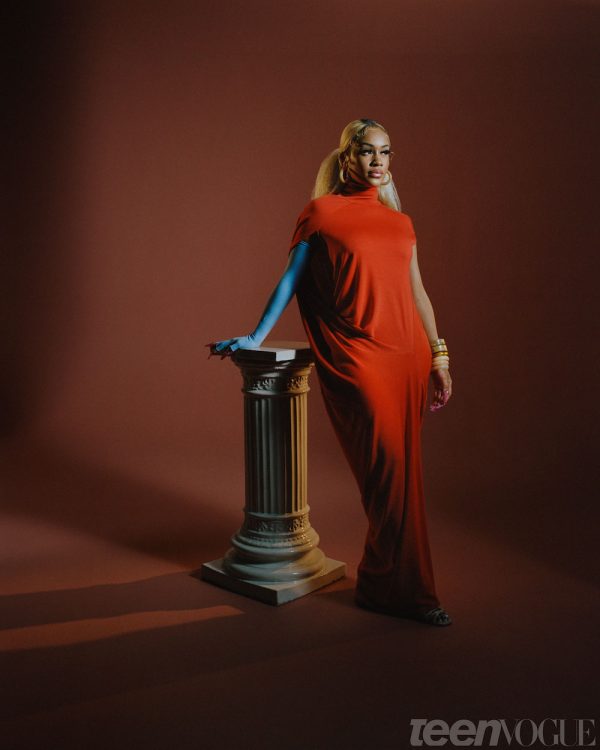 “I went from only wanting to write freestyles to having to create a hit. Now I know how to make the hits. I need to let people know that I’m a West Coast girl. I’m tri-racial. I come from a poppin’, big, male-dominated family, which explains my masculine energy at times. People were only seeing ‘icy girl,’ but who was the girl under the blonde wig?”

It turns out the girl under the wig actually was a great football player as well. One of our favorite parts of this feature was reading about Saweetie’s love for football — which makes perfect sense because her grandfather played for the 49ers and her pops was a college football star.

On being her persona, Saweetie: 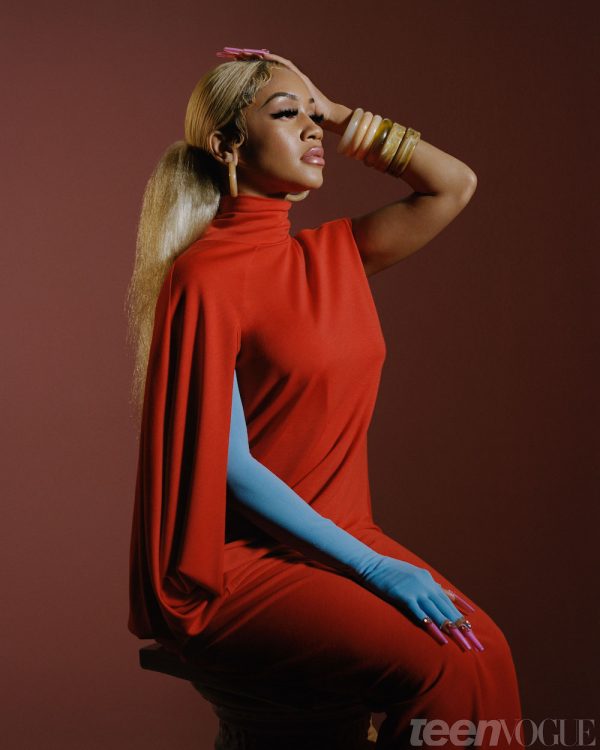 “I think that I use different personas as coping methods for how much I work. Saweetie is going onstage; Diamonté is reading contracts. I feel like Diamonté don’t take no sh*t and Saweetie is carefree.”

This must be a common thing for artists — remember when Beyoncé let the world in on who Sasha Fierce is?

Hit the flip for more from Saweetie about her values and how her cultural heritage is important to her.

Not surprisingly — Saweetie revealed she did have her moral character tested when she started out in entertainment.

On her moral values as a young woman in the music industry: 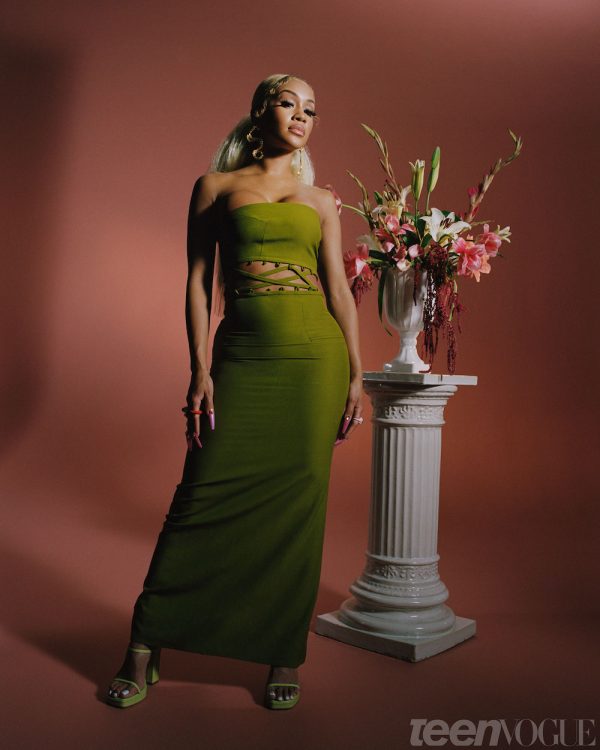 “When you are a young woman in L.A., sometimes you’re put in situations that can help you financially but will take a jab at your soul, your body. I remember basically just having the opportunity to get some money, but in doing so I would have violated my morals and my values. I was broke but I was like, I will never do anything to disrespect myself … no matter how desperate I get. That’s a story within itself, but I think it was a moment where I was like, it’s okay. You’ll eventually get what you want out of life as long as you’re praying and working hard.”

In line with the conversation about her morals and values, Saweetie also spoke about the movements she feels close to.

On the Black Lives Matter movement and rise in hate crimes against the AAPI community: 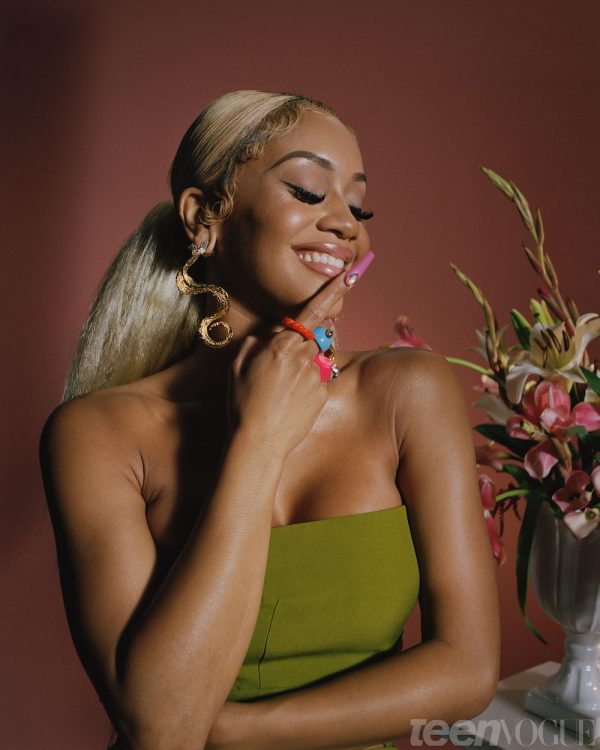 “No amount of money can bring back these lives or can Band-Aid the bruises, pains, and scars a lot of these families experience. A 70-, 80-year-old [Asian] grandmother who was walking down the street is getting beat up by a middle-aged man. The security guard just watches. And it makes me feel like, ‘Do I matter? If I wasn’t a celebrity and I was that age, would they care about me if I was to get beat up?”

On deciding to launch her nonprofit organization, the Icy Baby foundation, supporting Black and Asian groups: 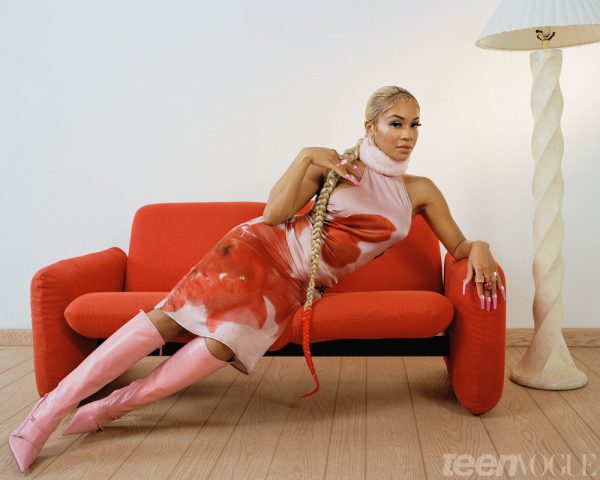 “Growing up, my mom always asked me, ‘Where’s your heart?’ When she would question my actions and my motives, she’d be like, ‘Diamonté, do you care? And if you care, what are you going to do about it?’”

We love it. You can tell Diamonté cares — she really puts a lot into her interactions with fans and she STAYS working. What do you think about the example Saweetie has set?

Check out the full article HERE 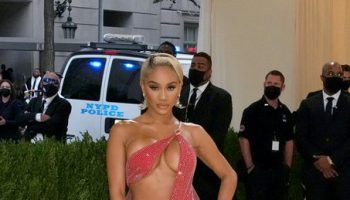 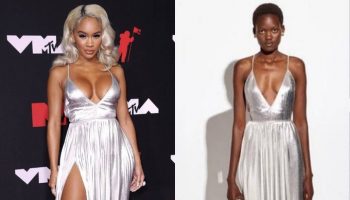 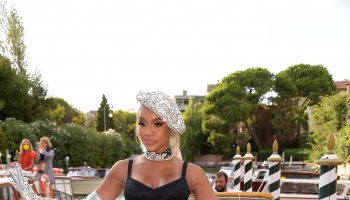 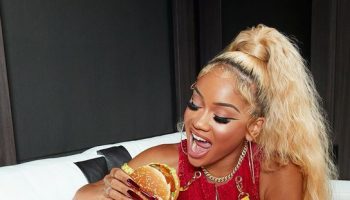 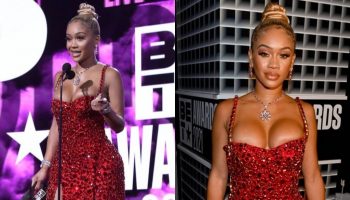