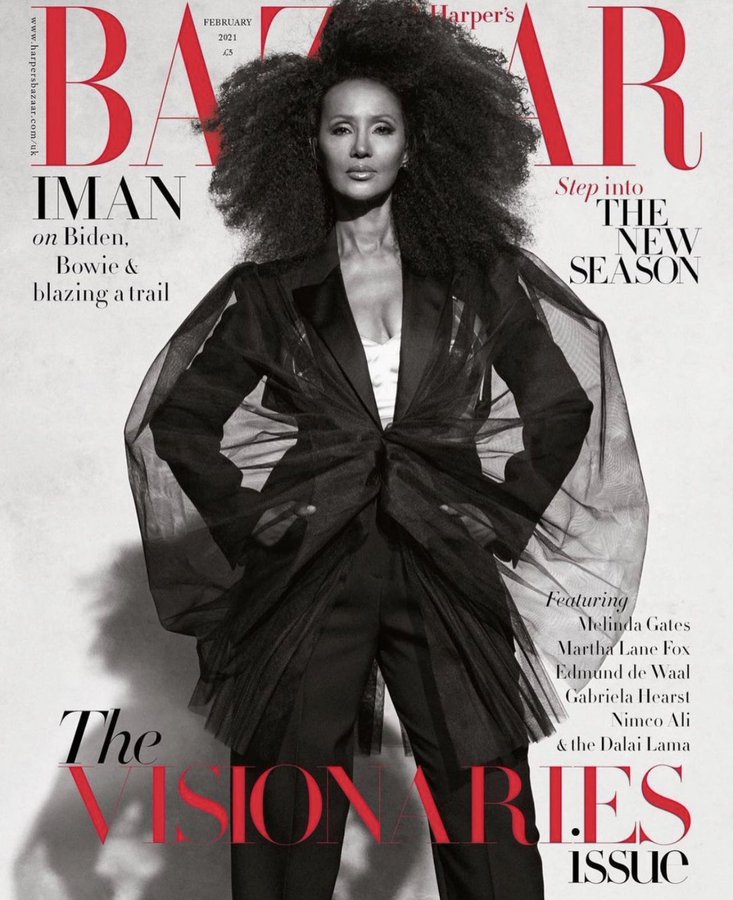 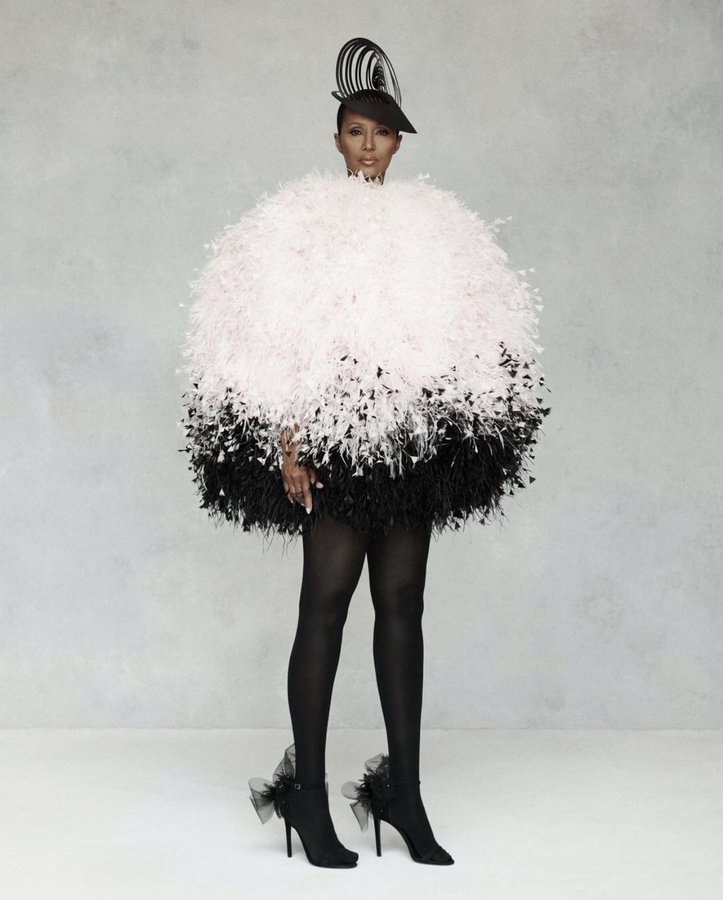 At 65, the Somali-born supermodel certainly makes it look aspirational, appearing on two of the magazine’s “Visionaries” covers cocooned in couture as voluminous as her naturally textured hair. The looks, styled by an all-Black glam squad (and using Iman Cosmetics, of course), evoke a perfect balance of softness and strength; the perfect energy for an eternal muse, entrepreneur, and advocate whose career has spanned decades, spawned an eponymous and still thriving beauty brand, fashion line, and global philanthropy. 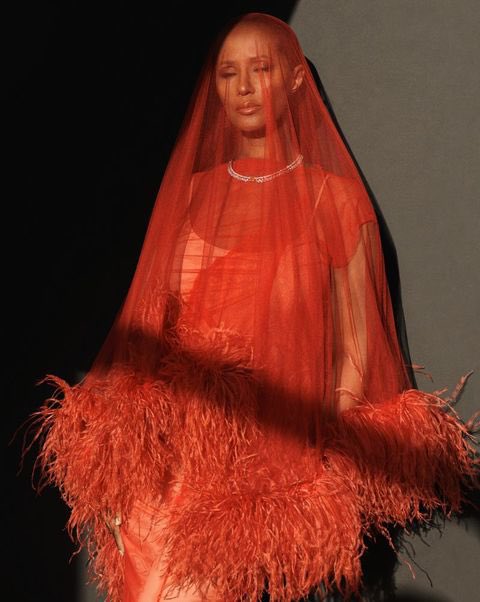 About  five years to the day of the death of her husband, soulmate and life partner, musician and actor David Bowie, the supermodel has become even more widely known as his widow, a painful reality she reflects upon in Bazaar.

“That’s the saddest time,” she says of the pending anniversary on January 10, just two days after what would’ve been Bowie’s 74th birthday. “David gave me the most exciting, touching, and deliriously loving 24 years,” she further explains. “Still, it was not enough—shockingly brief. And although I’ll never get used to losing him, David is nonetheless hiding in plain sight…His fans are still around, his music is still relevant.”   Bowie was trending in recent days, as bestselling author Morgan Jerkins revived a nearly 40-year-old clip of Bowie being interviewed by former MTV VJ Mark Goodman—and flipping it on the VJ to grill him about the lack of Black representation on the then-burgeoning music video network.

In 1983, when David Bowie got MTV together and asked them why weren't they playing Black artists >>>>> pic.twitter.com/rHavzF6kqA 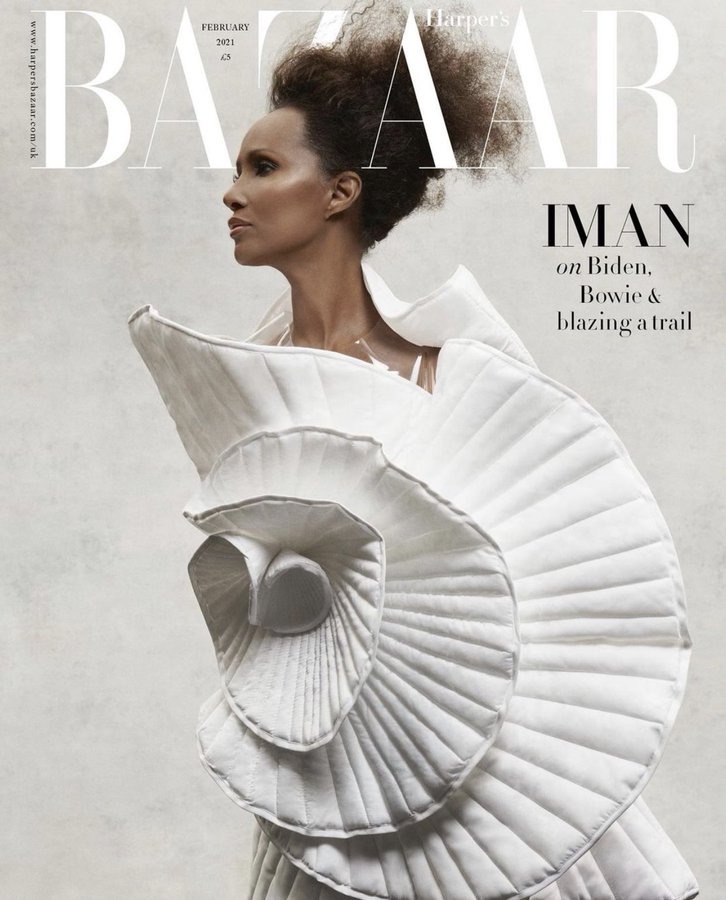 “My attraction to her was immediate and all-encompassing,” he reportedly said. “That she would be my wife, in my head, was a done deal. I’d never gone after anything in my life with such passion…I just knew she was the one.”

The couple married in 1992 and welcomed daughter Alexandria in 2000, enjoying what Iman calls “a really everyday marriage…a beautiful, ordinary life and that was what was great about it.

“You know, this was my true love,” she later adds. “My daughter once asked me if I would ever marry again and I said, ‘never.’

man is also mother to 42-year-old daughter Zulekha, from her first marriage to former NBA star Spencer Haywood. Reflecting on lessons learned from her own mother, she recalls:

I was raised by my mother telling me, ‘Always know your worth. And if something is not serving you right, walk away from it. Don’t settle for less, because that is what you will be getting from then on.’ I was aware of that. And so that was my superpower, because I was taught that way at a young age.

At 65, Iman is even more aware of her power, coming full circle from her childhood ambitions to follow in her father’s ambassador footsteps to becoming the first-ever global advocate for the charity Care, her own experience and instincts serving her well both abroad and at home in what we’ve come to know as Trump’s America.

With a new American administration on the horizon, the self-described “nomad” is both pragmatic and hopeful that some of our burdens will soon lift. “What I miss is the idea of belonging,” she says, later adding,” “I definitely think that this is the change we need.” 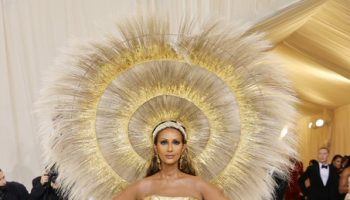 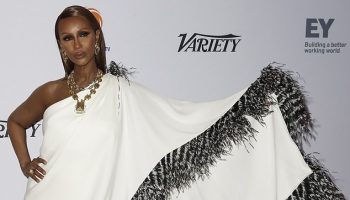 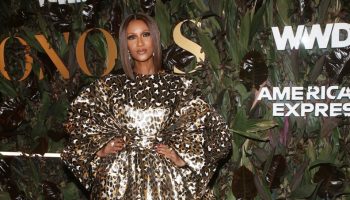 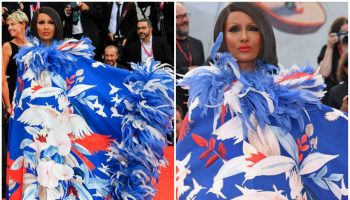 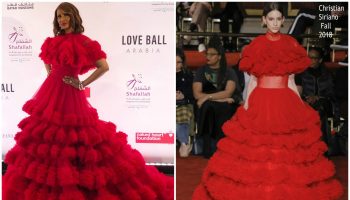