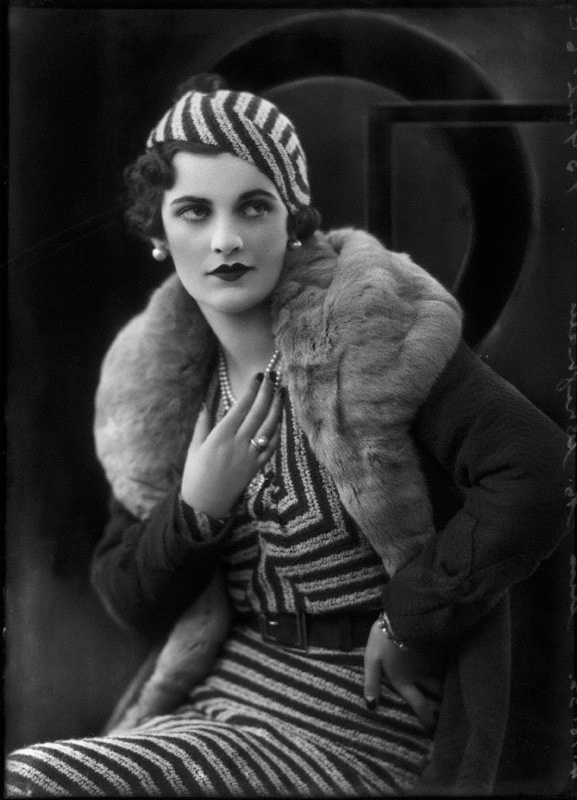 The most characteristic North American fashion trend from the 1930s to the end of World War II was attention at the shoulder, with butterfly sleeves and banjo sleeves, and exaggerated shoulder pads for both men and women by the 1940s. The period also saw the first widespread use of man-made fibres, especially rayon for dresses and viscose for linings and lingerie, and synthetic nylon stockings. The zipper became widely used.

The lighthearted, forward-looking attitude and fashions of the late 1920s lingered through most of 1930, but by the end of that year the effects of the Great Depression began to affect the public, and a more conservative approach to fashion displaced that of the 1920s.

skirts became longer and the waist-line was returned up to its normal position in an attempt to bring back the traditional “womanly” look. Other aspects of fashion from the 1920s took longer to phase out. Cloche hats remained popular until about 1933 while short hair remained popular for many women until late in the 1930s and even in the early 1940s. 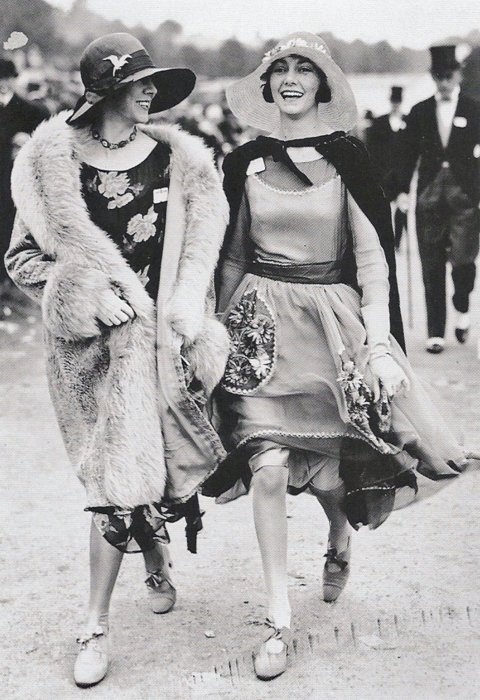 Jean Patou, who had first raised hemlines to 18″ off the floor with his “flapper” dresses of 1924, had begun lowering them again in 1927, using Vionnet’s handkerchief hemline to disguise the change. By 1930, longer skirts and natural waists were shown everywhere. 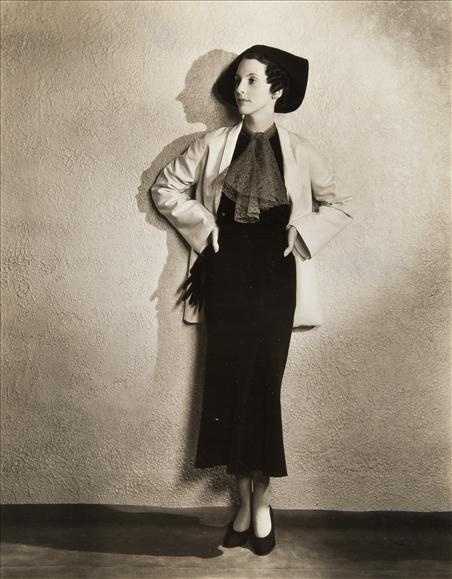 Schiaparelli who is credited with “changing the outline of fashion from soft to hard, from vague to definite.” She introduced the zipper, synthetic fabrics, simple suits with bold color accents, tailored evening gowns with matching jackets, wide shoulders, and the color shocking pink to the fashion world. By 1933, the trend toward wide shoulders and narrow waists had eclipsed the emphasis on the hips of the later 1920s. Wide shoulders would remain a staple of fashion until after the war. 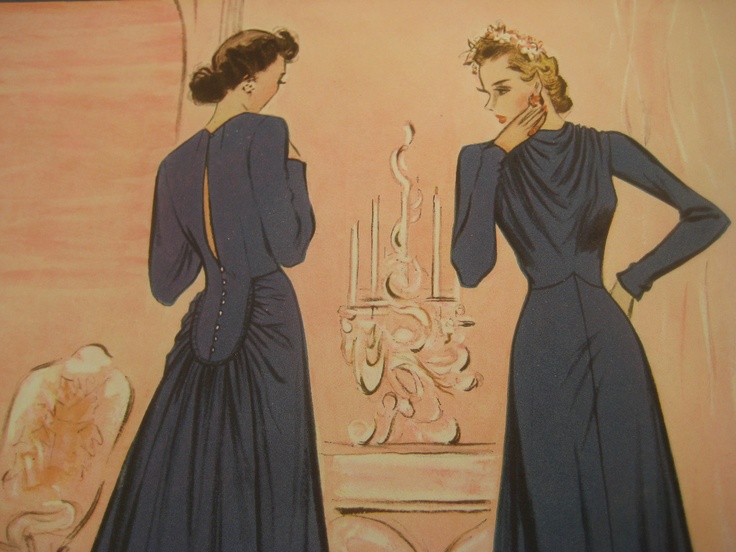 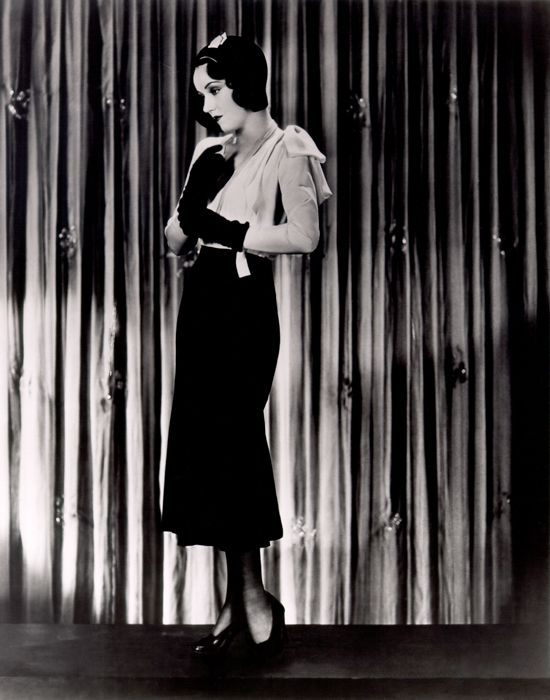 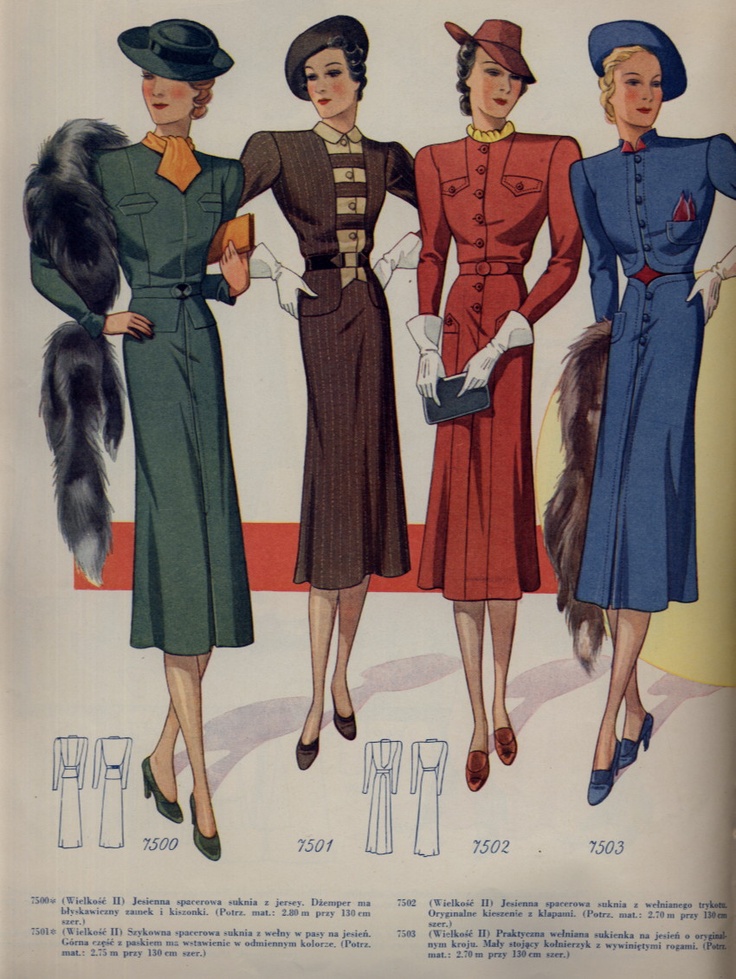 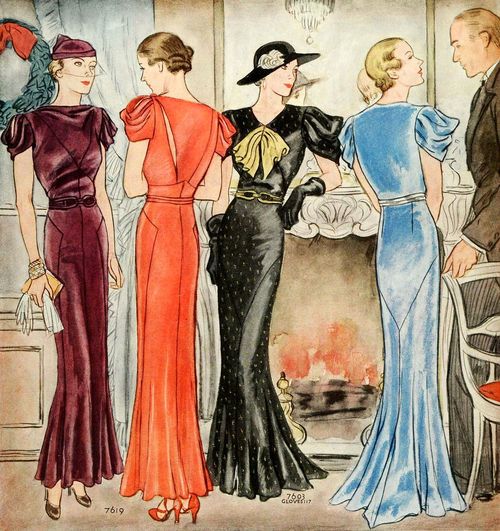 Feminine  curves were highlighted in the 1930s through the use of the bias-cut in dresses. Madeleine Vionnet was the innovator of the bias-cut and used this method to create sculptural dresses that molded and shaped over the body’s contours as it draped the female form. 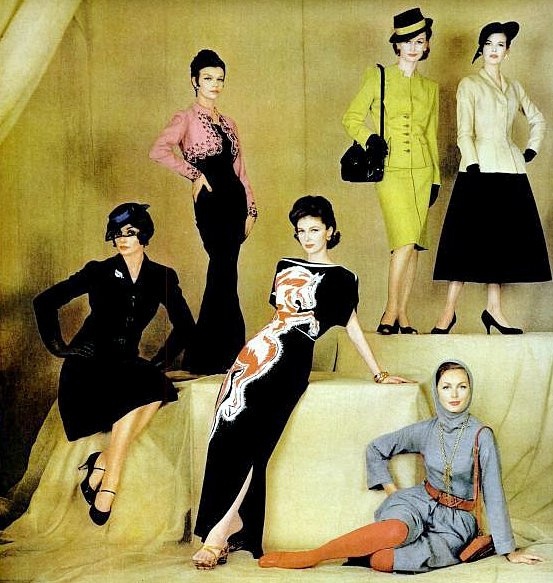 Through the mid-1930s, the natural waistline was often accompanied by emphasis on an empire line. Short bolero jackets, capelets, and dresses cut with fitted midriffs or seams below the bust increased the focus on breadth at the shoulder.

By the late ’30s, emphasis was moving to the back, with halter necklines and high-necked but backless evening gowns with sleeves 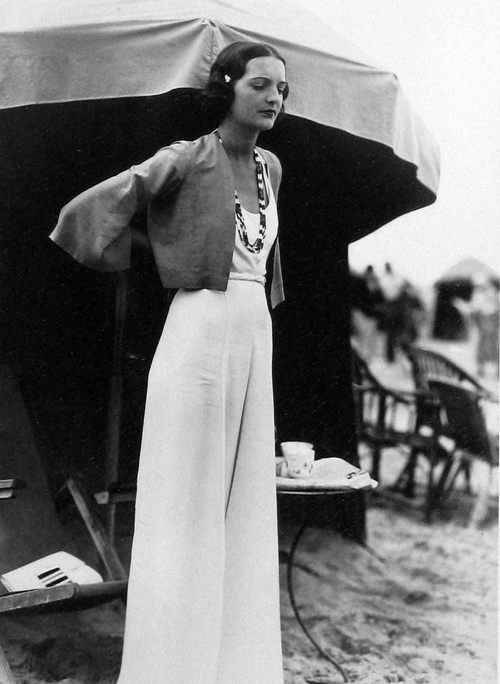 Evening gowns with matching jackets were worn to the theatre, nightclubs, and elegant restaurants. 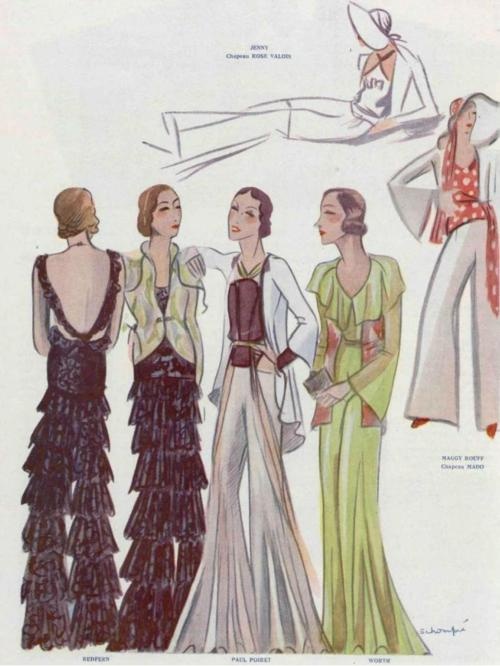 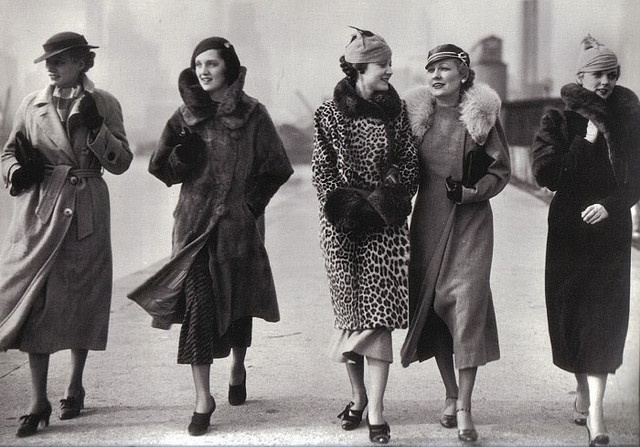 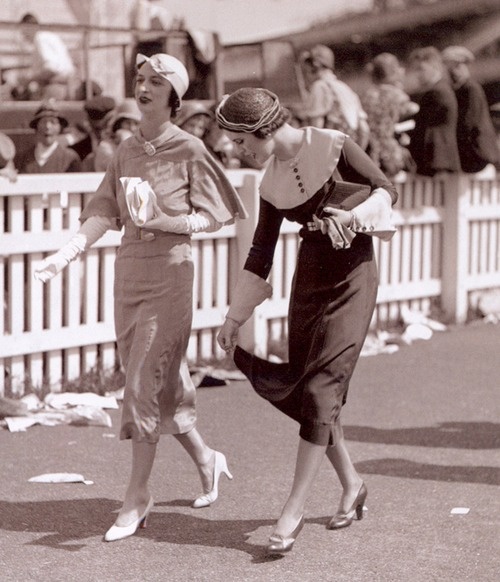 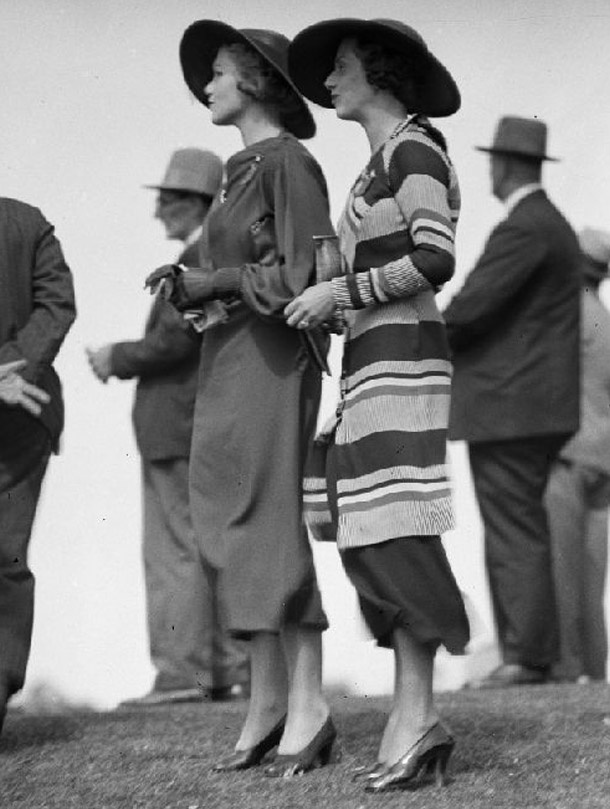 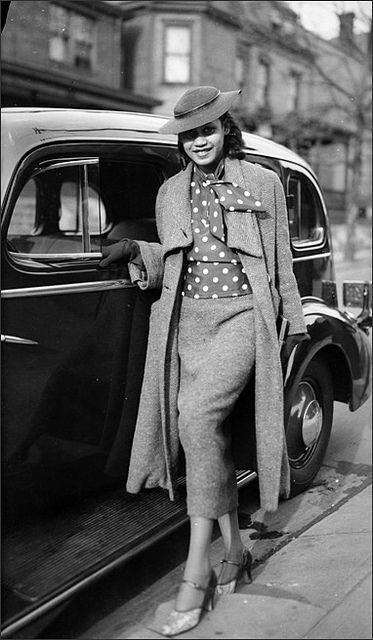 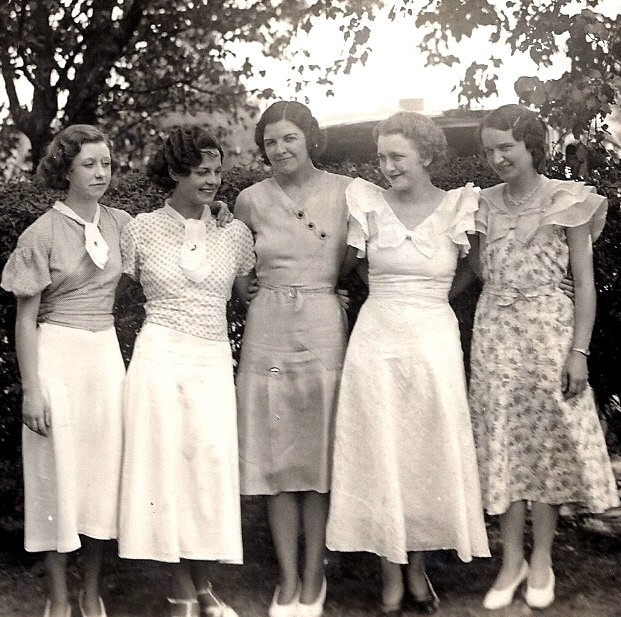 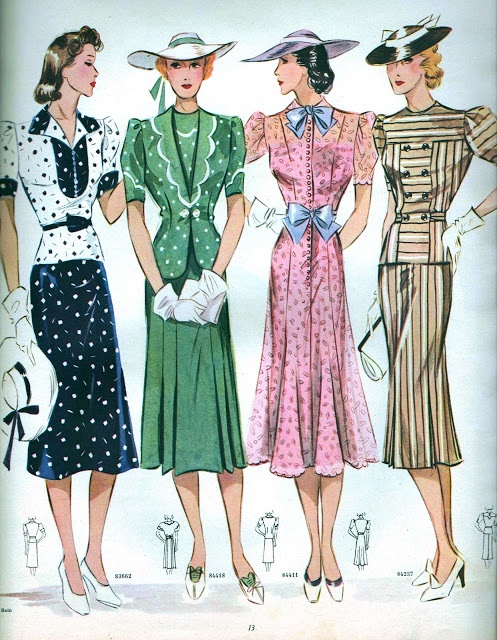 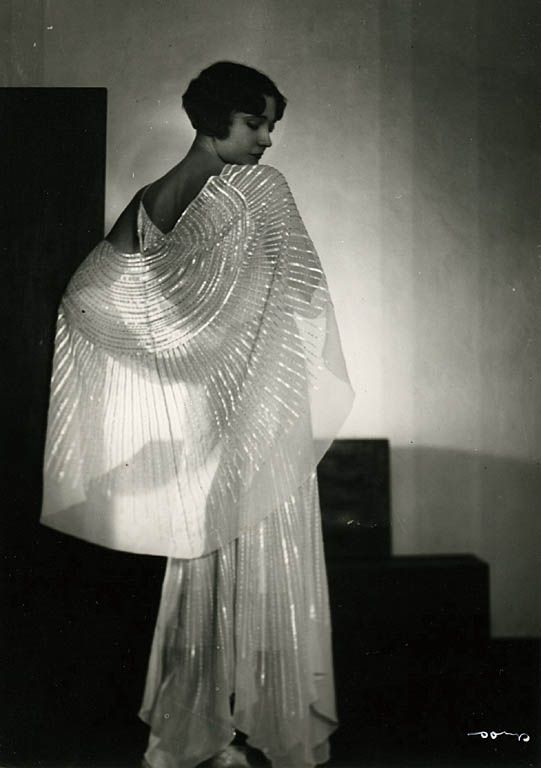 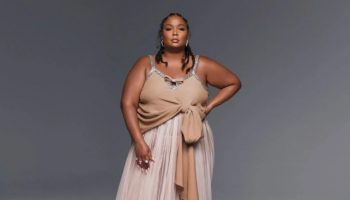 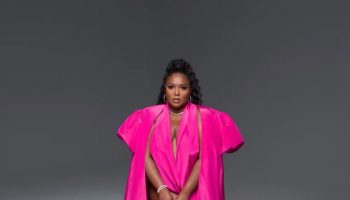 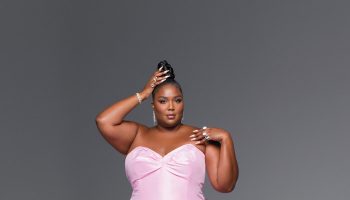 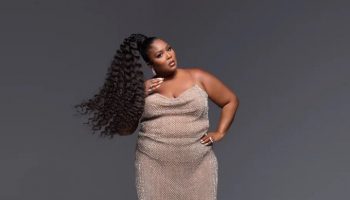 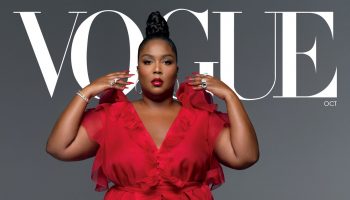